Other authors – thousands of friends I just haven’t met yet.

When this ol’ Jurassic Scots scribbler first ventured into the wunnerful realm of self-publishing, of all the benefits that attend being a writer, the least I expected was the unbounded pleasure of being part of the immense global diaspora of fellow authors. Granted, the Eighth Wonder of the Modern World, the Web, makes it all possible. In ages past (and not really so long ago), communicating with folks overseas as ‘penpals’ was fun, but more of a pastime, a hobby, than an integral part of the universe of quillscrapers. As part of my ‘building the platform’ as a self-publishing writer, it was necessary to develop social networking skills. Presence on a select few channels (you can’t do them all!), which for me included Facebook, Twitter, Goodreads, Google+, LinkedIn, and most importantly, my Blog, became paramount in ‘getting me out there’. 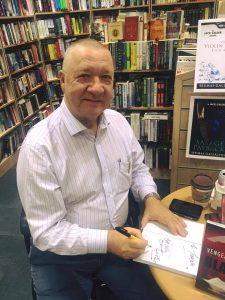 I decided to focus on ‘the business of writing’ for these relationships, which meant authors, poets, readers, editors, bloggers and just anyone who likes books. Incredibly, my connections now exceed 36,000 like-minded souls. Of course, these have been built up gradually over a period of ten years, but ‘a lot of little makes a lot’.

However, having such a critical mass of ‘friends’ is pointless unless it’s put to good use. I actively engage the social networks every day, even if that’s only for twenty minutes or so, but here’s the thing – I find great pleasure in being immersed in them. I have made solid pals all over the planet; pals who support my work by carrying Guest Blogs such as this by my dear friend Dedra; pals who comment and ‘like’, ‘love’, and laugh along with my daftness on Facebook; pals who reciprocate on Twitter when it’s time to have a new launch or special promotion for my books.

And therein lies the not-so-secret key – the word ‘reciprocate’ – helping others on the Web, particularly newbie writers, still-finding-their-‘Authors’-Voice’ self-publishing authors, setting out on the same remarkable journey that many of us have taken before them.

They say no man (or woman) is an island, although it may frequently feel that way in the small hours of the morning, or dead of night, when the sweat, blood and tears of creation are still real.

As an author, there is no excuse for being isolated. Get out there and connect with your pals! See you later. LUV YEEZ!