Phoenix Kassim, a.k.a. The Hakima, Revealed!

Hi everyone! I’m very pleased to have this opportunity to interview a young woman with an extraordinary background. 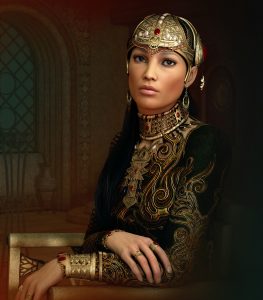 Phoenix Kassim is from a proud bloodline that’s been charged with defending the human world from the attack of the Jinn army, an army of invisible beings, led by their master, The Blue Jinni.

Currently, I’m working on telling the fascinating tale of his origins, in a new novel entitled, Iretunaar: The Blue Fire of the Desert. But, before you have a chance to read that, let’s see what Phoenix, his arch nemesis, has to say.

Tell us a little about yourself, Phoenix.

Right now, I’m a college student and engaged to be married. I’m studying medicine because I want to be a doctor like my mother, but I keep up with rigorous martial arts training as well. That’s pretty important to my Dad. It’s pretty great living as a normal girl now, even though some would say that I’m too young to be engaged.

I’m 18 years old now, and thankfully, we are currently living in a time of peace, but it wasn’t always so. From the day I was born, I saw them. They hunted me and tried to kill me at every turn. I had to assemble a great army and bring the world to work as one. That’s the only way they could be stopped.

Who? Who did you stop?

The one who started it all, the most powerful Jinni that ever existed. He’s commonly referred to as the Blue Jinni, but I know him as Iretunaar, the blue fire of the desert. He began the Jinn revolution, and it was him that formed an army to overthrow us. You see, as the favored creation of the Almighty, Jinn have been jealous all along.

So wait, you’re saying that he organized an army of these invisible beings to wipe us all out? Humanity? Was it his plan to kill us all?

Mostly, yes. He planned to keep some humans around as slaves, some of the physically stronger ones. In fact, he planned to start a breeding program for human slaves, so that the ones born into this system would be compliant types.

Why did he want to do this? What did we ever do to him?

He had hundreds of years to decide that humans were unworthy of the superior place we hold in this world. At first, when King Ghalib first captured him, he actually believed in him, in everything he stood for. He saw the king as fair, honest, and capable of leading the world of the Jinn and Humans into a glorious future, but in time he became frustrated. The king would never fully use the jinni’s power, and this was so frustrating to Iretunaar! He wanted to unleash his wrath on the human world and bring them by force to serve King Ghalib, but King Ghalib knew that it’s never a good idea to have loyalty that’s been forced upon you. He wanted people to choose to follow him, to use their free will, and follow him because he had earned their trust.

How did you gather the army to oppose him?

I started by meeting the various tribes of Jinn throughout the world, starting with the Siren tribe. Along the way, I gathered many allies from the jinn world and humans as well, humans with skills that we could use. Of course, the next step was gathering the tools needed to capture the jinni again.

What kinds of skills?

Well, the Siren Queen can wield storms, just like the Blue Jinni, but of course, the Sirens all have the ability to appear as beautiful women with soft alluring voices. That’s how they trap males on their island… The Time Jumpers have the ability to pass through cracks in time, and glimpse scenes from the past. Sometimes this information is quite sought after by enemies.

The 5 wives of the Blue Jinni all have unique abilities. One can feed off the dark energy of an evil person, and hey, let’s face it, that’s kind of a cool ability! I was in awe of this power when I saw her use it for the first time.

Some Jinn have the ability to fly and enter other dimensions. There are those that can hear the secrets of our fate being discussed in Paradise. Of course, this is expressly forbidden, but there have been the occasional transgressors.

Is it true that you have always been able to see them?

Yes, that’s true, since the day I was born. I’ve always sensed their presence. That wasn’t always so great when I was a kid because other kids thought I was really weird. Thankfully, I didn’t go to school for long. I was homeschooled for a few years by Sophia, my mentor.

That’s right! Your mentor was Sophia. She’s a very wise woman. How did you measure up to all her tests?

Not well sometimes. She was tough but fair. I must say, her teachings saved my life, many times over.

What advice do you have for everyone? Final comments?

I’d just like to caution the world to avoid amnesia when it comes to remembering your past, but walk bravely towards the future. Pass down the folklore of your roots and remind each generation of the world that we don’t see every day. It concerns me how shallow people are now, and how skeptical. That’s how my arch nemeses found his way back into our world, and some of his kind may come back again if we’re not prepared. Don’t let your stories fade away in favor of video games and screen time. May God be with you.

If you want to read all about the adventures of Phoenix Kassim, why not check out The Hakima’s Tale, here on the Blue Jinni Media web site?

Just check under the tab labeled Books. They are available in 3 formats! Print, Ebook, and Audiobook. If you’re bored in the car or on the metro, why not play them from your phone and enjoy?